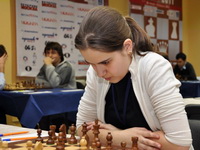 A difficult position to properly evaluate, and even more difficult to play over the board!  Black's pieces give a better impression--they are centralized and harmoniously placed--but White's Bishops are dangerously poised to strike on the Kingside.  The game has many of the double-edged features of an isolated Queen pawn game.

This move was fine the move before, but here the idea does not have the same effect.  There followed

A nasty surprise for the Black player!  All of a sudden White's attack comes to life.  Worse still , after Kosteniuk's weak reply the house collapsed:

Mate threats appear! Black is dead lost. I recommend the reader to play over the whole game with the pgn-viewer below. The game went on much longer than it should have , mostly because of time trouble. White missed a mate in 3 at one point(!) but still managed to win.

Posted by Kevin Spraggett at 4:03 AM Links to this post